Daz3D studio has previously had an option to buy a 3D printed copy of some models. Before I started with 3D that option was cancelled for reasons I don't know. Then late October 2017 a plug-in was released that allowed you to upload your model to GamePrint. They print your model on a high quality industy 3D printer, paint it and ship it to you.
Awesome. I just had to get one. Of cause there are centain things GamePrint wouldn't print. That is things like actual weapons, sexual positions, violence, hate and such. In many ways the usual stuff.
OK. My model has to be one that I can have on a shelf a let anybody see it. I wanted the model to be a beautiful female. She must be posed in an open and welcoming way. And she would be used as a mascot for my gallery. After a lot of consideration I decided to go for a angel with long hair and standing on a rock as the base.
Because the service was new, there was 10% discount and free shipping. So I paid 225 USD for a 7 inch (17,7 cm) model. Yes. 225 USD is a significant amount of money. But It's definetly worth it. The model is printed in such a resolution, that you can't see each layer of material. And the paint job is also very well done and it is 'only' a standard model.
3 months later my mailman brought me a huge box. I was very excited to see the result. Remember I ordered within a few months after release. So I didn't knew what to expect. Inside the box, there was another box with the GamePrint logo and the inside of this box was padded with foam and some white feathery fluff.
The model came in two pieces. The angel and the base. With a pin under one foot and a magnet under the other, the model snapped to the base with ease. The buttom of the base is slightly convex. I don't know if it is deliberately. But it's so much easier to rotate the model and enjoy it from all angles.
Will I order another 3D print. Oh yes. Definetly. 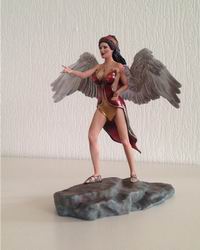 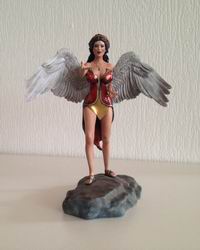 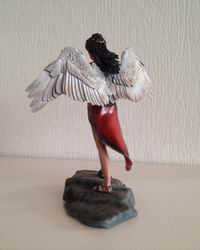 Have you seen these renders? 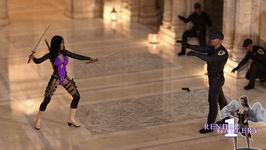 This page its design and all meterials are copyrighted by Jakob Hestbæk. Excluded from this is the product images shown below the individual render and at the review pages.